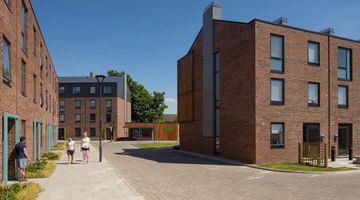 Everything about Student Accommodation Carlisle

Carlisle is a cathedral city and the largest settlement in the county town of Cumbria. It is located at the junction of the rivers Eden, Caldew and Petteril, just south of Scotland. This city of Carlisle was once a Roman settlement serving the forts of Hadrian’s Wall offering a breathtaking surrounding landscape. It is regarded as one of the happiest cities in the country, known for its unquestionable beauty and the nearby Lake District. The city is filled with historic landmarks, award-winning restaurants, and open green parklands, the Great Border City combines the city environment with a close community. Due to the introduction of textile manufacturing mills during the Industrial Revolution, Carlisle was transformed into a densely populated mill town. In today’s time, Carlisle serves as the main cultural, commercial and industrial centre for North Cumbria.

Students searching for student accommodation Carlisle must-visit student housing platforms such as University Living. It’s an AI-enabled marketplace that provides accommodation to students pursuing higher education in various cities and towns of the UK. With a primary focus on purpose-built student accommodation (PBSA), the company offers a wide range of student room types. These include - student studio, student apartments, student flats, en-suite and shared rooms. All these rooms are furnished to the highest standards so that the student feels at home at the time.

Carlisle is an excellent place for those who value the Great Outdoors as here you’ll find locals often spending entire weekends hiking, cycling, trekking or climbing. The city has a perfect setting nestled between Northumberland and Lake District National Parks, the Solway coast, the Pennines and the neighbouring Scottish border. Although it also offers a good city experience with the centre providing access to several high-street stores such as Marks & Spencer, and other big brands including Primark, Next, HMV, and more. The people of Carlisle like their ales such that Lowther Street and the Lanes tend to favour more traditional brews, while over at Botchergate you can find a majority of modern bars. The city can be easily explored either on foot or by public transport like buses and trains. Carlisle railway station is the main station on the West Coast Main Line operating direct services to major cities like Glasgow Central, Manchester, London Euston, Edinburgh, Newcastle, and stopping at plenty local stations as well.

Things to do in Carlisle

You can learn about the city’s heritage and culture by visiting Carlisle Castle, which was a temporary prison for Mary Queen of Scots in 1567. Cumbria’s Museum of Military Life is another great place to visit along with Carlisle Cathedral, founded in 1122. The city organises a 10-day summer Carlisle Pageant in the city centre and has free festivities centred on the city’s history and heritage. This event includes a puppet parade, local market stalls and Fringe Festival, featuring street theatre performances for all walks of life. Enjoy breathtaking views across the Irthing valley to the Lake District Fells from Birdoswald fort. Music lovers must head straight to The Brickyard, longest-running independent venue for live music in Carlisle. It is a unique century-old building on a cobbled street and has hosted several popular bands like Foals, Kasabian, Biffy Clyro, The 1975 and countless up-and-coming artists.

Carlisle is home to four campuses of the famous University of Cumbria, each located on Fusehill Street, Brampton Road, Paternoster Row and Newcastle Street. The University of Cumbria is a public university offering degree courses in higher education such as Law, Business, Arts, Information Technology, and much more.

Q. How to rent student accommodation in Carlisle?

A. There are 3 easy steps to follow and you are done: a) Choose your accommodation. b) Pay initial security deposit if any. c) Confirm your booking with us. Simply do not worry if you cannot do it on your own, our experienced staff will be more than happy to assist you in the process.

Q. What are the different types of student accommodation in Carlisle?

A. University Living is into providing student specific homes that are otherwise known as purpose-built student accommodation (PBSA). Such accommodations are planned in such a way that every need of the student is met. The location of the property is near universities and other places of interest. There are several room types like shared, studio, en-suite, and apartment style living. Short-termstay facility is also available for students in summer schools or exchange programmes.

A. Yes. There is no need to leave orchange your accommodation during your internship period. Your lease period can be extended as long as you’re enrolled as a student at some university in the same city in the UK.

Q. What are the different types of student rooms in Carlisle?

Q. Are discounts available for student housing in Carlisle?

Q. Can I pay my student accommodation rent in instalments in Carlisle?

A. Yes, easy instalments options are available with or without a guarantor support. All needed information will be there for you at University Living website before you book your accommodation.