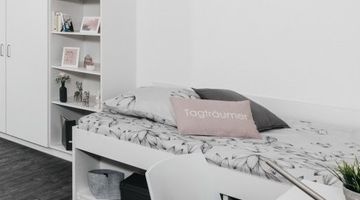 Everything about Student Accommodation Munster

Munster is a historic university city in the northern part of the state. It is the capital of Westphalia and is also considered to be its cultural centre. The city has several Romanesque and Gothic towers that make it different from other German cities. This old town suffered a lot of destruction during the second world war, but its limestone Renaissance and Gothic facades were reconstructed afterwards. Did you know that there are more cycles in this city than its residents? Students and locals mostly use bicycles to travel around and there are cycle paths throughout the city.

Münster is a city in western Germany. It’s known for the 13th-century St. Paulus Dom cathedral, counted among the most significant church buildings in Münster. It is built in the Gothic and Romanesque styles with the pair of Romanesque towers that forms the westwork from the 1100s. Prinzipalmarkt, one of the city’s favourite shopping destinations and tells a lot about Münster’s prestige in Medieval and Renaissance times. The square is framed by gabled houses, the Gothic city hall and late medieval St. Lamberti Church.

Munster is famous for Alsatian washed-rind Muenster cheese, introduced by German immigrants. This cheese is quite different from the processed dairy food Sweet Muenster Cheese. The Munster’s City Hall Gothic architecture is magnificent enough to stop anybody in their tracks. The intricacy of its facade makes it obvious why this structure is regarded as one of the most beautiful Gothic buildings in entire Germany.

Apart from being one of the most desirable cities to live in, Munster is also one of the most classic cities in the States. Those who like living in a flat of their own should know that it is an expensive option, and a better one would be sharing a private flat. There are multiple student accommodation options including purpose-built student accommodation (PBSA), private apartments, homestays, and more.

Where to study in Munster?

Q. How can I rent student accommodation in Munster?

A. You can book your home away from home in 3 easy steps: a) Select the accommodation you like to stay in. b) Pay the security deposit if required to do so. c) Confirm your booking. In all these steps you will be provided free guidance from our experienced team.

Q. What are the different types of student home in Munster?

A. There are purpose-built student accommodation (PBSA) offered by University Living. These type of accommodations in Munster are close to various universities where students get the full freedom to live their best with many options available to them. You can pick from shared and private rooms, studios, and apartments. We also provide short-term stays for students in summer school and exchange programmes.

Q. What are the different types of student rooms in Munster?

A. It totally depends on the student accommodation you choose, but most of our student properties in Munster have bills included, so you don’t have to worry about paying for anything else. The bills include Wi-Fi, water, gas, electricity, and other facilities such as a fitness centre, games room, outdoor courtyard, laundry room, and other communal spaces.

Q. Can I view my student apartment in Munster before booking?

Q. Can I pay my student accommodation rent in installments in Munster?

A. Yes. You can pay your rent in easy installments through various modes including bank transfer or your debit/credit card.

Q. How do I know my student accommodation in Munster is safe?