All distances from city center Gloucester 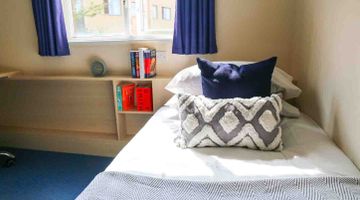 Everything about Student Accommodation Gloicester

Located on the River Severn, Gloucester is a cathedral city and district in the administrative and historic county of Gloucestershire. It was founded by the Roman Emperor Nerva as Colonia Glevum Nervensis in AD 97 and was granted its first charter in 1155 by Henry II. Most of the tourists visit Gloucester due to its Catherdral, which is also the burial place of King Edward II and Walter de Lacy, and features in scenes from the Harry Potter films. It is home to one public university, which attracts several domestic and international students every year, making it difficult to find quality student accommodation Gloucester. Each year students flock to the city in a large number, making it even more challenging to secure accommodation in the campus hall. The student accommodations are carefully chosen, made student-specific in all aspects, and provisioned with lots of onsite amenities.

University Living is a global student housing platform offers purpose-built student accommodations for students. Those searching for a private student home in the city should visit accommodation websites like University Living to compare from a wide range of options available and make a wise decision about the best student accommodation. All of these off-campus properties are well-furnished and offer modern amenities like a common lounge area, games room, study space, card-operated laundry, fully-equipped fitness centre, garden, and more. Students can choose from a wide variety of room types such as apartments, student flat, shared and en-suite room, and student studio.

Gloucester at a Glance

It is home to England's longest river, most extensive mature oak woodland, and largest inland port. It is a city where you can visit iconic film locations, walk in the footsteps of renowned poets, and explore 4,500-year-old mines. You can also be the part of the oldest music festivals in the British Isles, The Three Choirs Festival, which dates back to the 18th century. This festival is held in the city every third year with other venues being Hereford and Worcester.

The Forest of Dean and Puzzlewood is a must-visit attraction if you’re visiting this city. This magical, moss-covered woodland is great for a family day out, with plenty of exciting activities for children. All of this and more make it a famous destination among students from around the world aspiring to start a new life in Gloucester, UK.

Gloucester is quite famous for its monastic establishments, including St Peter's Abbey founded in 679, the nearby St Oswald's Priory, founded in the 890s, and Llanthony Secunda Priory. The city is also the place of the Siege of Gloucester in 1643, during which Gloucester held out against Royalist forces in the First English Civil War.

Other places of interest include the museum and school of art and science, the former county, the Whitefield memorial church, and the Shire Hall. There is also a park in the south of the city which contains a spa, a chalybeate spring having been discovered in 1814.

The constant rising in the number of students flying to Gloucester makes it challenging for universities to accommodate them all in the student hall, thereby creating a massive demand for private student housing in the city. These off-campus alternatives are situated either within walking or cycling distance from the city’s universities to help students cut down on both time and money on their daily commute. It’s also quite easy to explore the city with the help of well-connected public transport system, which includes buses, trains, and light rail.

Where to Study in Gloucester?

Q. What types of rooms are available for students in Gloucester?

A. Students have the option of 3 types of rooms to choose from. Shared: 2 or more students share the same room bathroom and kitchen and all common spaces. En-suite/Private: you will have your private room and bathroom while you will share the kitchen and other common spaces. Studios: This is a self-contained unit with a bedroom and cooking space along with a private washroom.

Q. If I am coming with my friend can we share the accommodation?

Q. Does my property at Gloucester offer any on-site amenities?

A. All properties in Gloucester offer on-site amenities such as a gym, games room, common study area, courtyard, fully fitted kitchen, and much more. On-site amenities are included in the rent.

Q. When should I book my student home in Gloucester for September intake?

A. 6 months before is said to be a good time to book your accommodation, but the sooner you book the better it is as it will give you more options to choose from.

Q. What all things should I consider while booking my accommodation?

A. There are several things you should consider while booking your accommodation. Two of the most important things are the area you want to stay in and the price you want to pay. Secondly always keep in mind the room type you want to book, the size of the room, and the type of amenities you want on the property.

Q. Are parking services offered on the property?

A. You will have to speak to our experts and they will inform you about the same as different properties have different rules and regulations with respect to parking.

Q. After posting my inquiry how long will it take for your experts to call back?

Q. What will happen to my accommodation during my placement year in Gloucester?