All distances from city center Lafayette 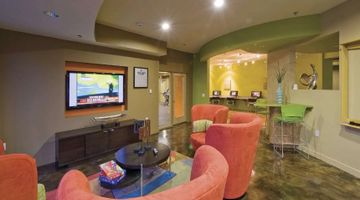 Everything about Student Accommodation Lafayette

Lafayette is a city and the county seat in Tippecanoe County, Indiana. It is approximately 63 miles northwest of Indianapolis and 125 miles southeast of Chicago. Purdue University, located on the other side of the Wabash River, makes a considerable contribution to both communities.

According to Fairfield Township's history web page, Lafayette became a significant 19th century corridor to the West and was called "The Star of the West" by a local newspaper. The "Star City" quickly became a market and transportation hub for the surrounding agricultural districts due to its location.

University Living offers off-campus housing to students pursuing higher education. To make traveling easier, these accommodations are usually close to the school. They provide a variety of lodging types, ranging from private studios to communal flats. The conveniences provided by these accommodations make life easier.

Lafayette is the heart of Cajun Country and is well worth a day trip from Baton Rouge , especially if you include a visit to Avery Island, where the renowned Tabasco pepper sauce is made. On one’s journey to Lafayette, people also stop at Cafe Des Amies in Breaux Bridge.

The city is well-known for its cuisine, folk music, and world-class festivals. Lafayette, was called "the Hub City" because of its pivotal role in the Gulf Coast's oil and gas industry. One can make the most out of a thriving, developing city with plenty to offer visitors and residents.

There are few prestigious schools in the city such as the University of Louisiana at Lafayette, Remington College and the South Louisiana Community College. Lafayette College is a respected liberal arts college" with a "welcoming, communal atmosphere." "Walking around campus left me with a nice, at-home feeling," one psychology major exclaims, even before deciding to attend.

Lafayette has a lot of affordable student accommodation for you to choose fr om. Be it ensuite room or private studios, they are mostly located at prime areas to connect you to nearby transit stations.

Q. Is there a bookstore near the student accommodation in Lafayette?

A. Yes, the bookshop is close to a lot of the student housing choices, so you can visit it whenever you want to relax and read.

Q. Are there any Lafayette apartments that can house teenagers?

A. Rental homes seldom allow visitors under the age of 18. However, there are a number of qualities that might help with this. We advise you to submit your application so that our housing specialists can provide you feedback if you require any more clarification on this.

Q. Is choosing my roommate an option?

A. Yes, but it also hinges on the timing of the reservation. For instance, some lodgings include flats and suites that are only available to men or women. Also, let our Accommodation Experts know if there is a particular person you would want to live with so they can do their best to meet your demands.

Q. Can I relocate on the weekends?

A. In fact, it is possible. Try to arrive during the week, though, as some lodgings only take reservations on the weekends. If you select one of these lodging choices, we suggest planning your arrival for a weekday. Don't worry if you already have everything you need, though; we'll make weekend arrival arrangements with the property. Simply provide our lodging professionals with an update.

Q. Can I know the number of student accommodation facilities in Lafayette?

A. One of three types of rooms is provided to you: Sharing Type: A room of this type may accommodate two or more students. It features a little common kitchen and just one room with a bathroom. En-suite Sort: In this kind of accommodation, you just have a shared kitchen but have a private bedroom and bathroom. Studios: This type of accommodation, which solely belongs to one person, includes a bedroom, kitchen, and bathroom.

Q. What variables should I take into account when looking for student housing in Lafayette?

Q. Do the accommodations have amenities for renters with disabilities?

A. Yes, we do recognize those with unique needs. For instance, we have a variety of rooms for students who need wheelchairs, mobility aids, or both.

Q. Do I need to pay the rent prior I check in?

A. If not the lump sum, you must pay at least the first installment of your rent. So, you need to spend some amount otherwise you can’t move in. So, your first installment is like the security that makes the process transparent.