All distances from city center Stirling 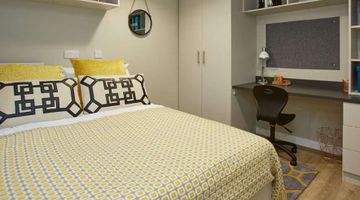 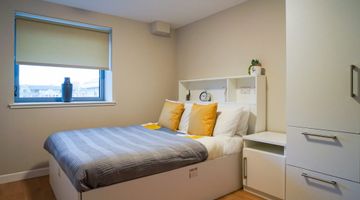 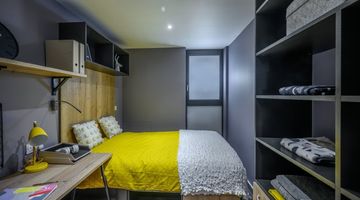 Everything about Student Accommodation Stirling

Stirling is a city in central Scotland, north-west of the Scottish capital, Edinburgh and north-east of Glasgow. The city is shaped by its unique history, surrounded by rich farmland, connecting the royal citadel, the medieval old town with its merchants and tradesmen. While visiting this place you can witness a lively arts scene and the beauty of a national park close by. Due to its strategic location, this vibrant city is known as the ‘Gateway to the Highlands’. It has a young population with 20 per cent of Stirling's population is aged between 16 and 30 years. The city offers the charm of a historic destination with the benefit of two of Scotland’s largest cities nearby for weekend adventures.

Students coming to the city for higher education can find student housing on University Living, an AI and tech-enabled student housing marketplace. It allows students pursuing higher studies in the UK and other countries to book off-campus student home. It has a wide selection of properties and students can filter their choice based on their budget and other preferences. These properties also offer loads of onsite amenities like an outdoor courtyard, bike storage, fitness centre, cinema room, card-operated laundries, and plenty more.

Stirling is perfectly placed which allows you to make the most of what central Scotland has to offer. It’s a lovely city and there are loads to get stuck into both on and off-campus, from sports and music to the arts – there’s something for everyone. Enjoy the breathtaking views from Stirling Castle's hill-top esplanade towards the National Wallace Monument located on the edge of the rolling Ochil Hills. The surrounding areas of the city have several charming villages to explore. You can start by visiting St Ninians, which was formerly known as Eccles and then to Bridge of Allan, a medieval spa town at the foot of the Ochil Hills on Allan Water. It is a holiday spot with some fine Victorian villas and preserved public buildings to view.

The city of Stirling has a thriving food scene, from Hermann’s Austrian cuisine to busy British bistro Brea or Maharaja for Indian fayre, you will be spoilt for choice. While living in your student accommodation Stirling you can also make your own tasty dishes by using the freshly produce local ingredients from the Stirling Farmers Market. This market is located on Port Street in the city centre and opens on the second Saturday of every month. There are several student-friendly food outlets throughout the city centre that offer regular student offers. Dance lovers must visit Fubar and Dusk, two of the city’s biggest nightclubs, which do special events and weekly student nights. On the other hand, Stirling Castle and The Albert Halls regularly host some of music’s biggest names.

The city is home to the famous University of Stirling founded by royal charter in 1967. It is a public university located in the Central Belt of Scotland, built within the walled Airthrey Castle estate. The university attracts students from a wide range of backgrounds, with more 14,000 students from 120 different nationalities. International students can get on-campus housing, with the bulk of the accommodation overlooking the loch. However, many students also prefer to stay in private accommodations known as purpose-built student accommodations(PBSA) as they are newly-built and offers a wide range of modern amenities. They provide an array of student room types such as student apartment, student flat, shared and en-suite student rooms, as well as a student studio.

Q. How do I resolve my problem with student accommodation in Stirling?

A. It is very simple to find your ideal room in Stirling. In three easy steps, you can book your ideal home in a different city. Start with choosing the right accommodation that will fulfill your needs and wants. After that pay the security deposit if required, and finally, confirm your booking so that you can enjoy your free guidance.

Q. What are some of the popular places in Stirling?

A. Central Stirling, Bridge of Allan, and Causewayhead are some of the most popular off-campus areas where students like to stay, all the places are student-friendly and offer good accommodations.

Q. Do you provide parking facilities on the property?

A. Your accommodation expert will be able to help you with this as this depends on each provider. Some of them might offer parking spaces while others might not.

Q. Do I have to pay extra for the bills or it is included in the rent?

A. This is something you will have to see with the property that you choose, most of the properties have bills included in the rent thus you don’t have to worry about paying anything extra. Our housing experts will help you find out more about the same.

Q. What if I want to have a look at my student accommodation prior to the booking?

A. By contacting our housing experts you can schedule a virtual tour of your property that you wish to book, they will help you get it done.

Q. Where will I stay during my placement year?

A. University Living will help you with your accommodation even in your placement year as you will still be associated with the university and thus we will provide you with housing.

Q. Is my student accommodation well connected in the city?

A. Yes, all the properties are well connected in the city, you can move around by public transport and you will be able to cover the entire city.

Q. What is the right time to book student accommodation?