Living in Lightfoot Hall Chelsea student accommodation London means you’ll have one of the most desirable postcodes in London, SW3. Situated in Chelsea, just off the famous Kings Road, Lightfoot Hall offers light and airy student living in one of the most sought after locations in the capital. Within walking distance of some of London’s largest universities, Lightfoot Hall is also close to some of the world’s most famous shops, such as Harrods, stylish cafes, and for sports fans, Chelsea Football Club.

Located in the heart of fashionable Chelsea with its cafes, restaurants, bars, gyms, boutique shopping and supermarkets, Lightfoot Hall is in walking distance of some of London’s largest universities, including Imperial College London, which is round the corner, Westminster University, Chelsea Art College, Francis King School of English, Regent School, MPW and many more.

The student studios at Lightfoot Hall feature your own en-suite bathroom facilities, a TV and a modern kitchen equipped with everything you might need to prepare a light snack or a delicious evening meal. Twin en-suite rooms have a TV, fridge/freezer and a microwave. The large communal kitchens are open to all residents and have plenty of sinks, hobs, ovens and cabinets for each student. Lightfoot Hall also has fully equipped laundry facilities available to use at any time.

Space isn’t a problem at Lightfoot Hall when you want to socialise with roommates and friends. One large common rooms mean you’ll always be able to find somewhere for a chat or a quiet area in which to start writing your latest assignment. If you want student living in one of the country’s most prestigious postcodes, then Lightfoot Hall is definitely for you.

Your Bills (Inclusive of) 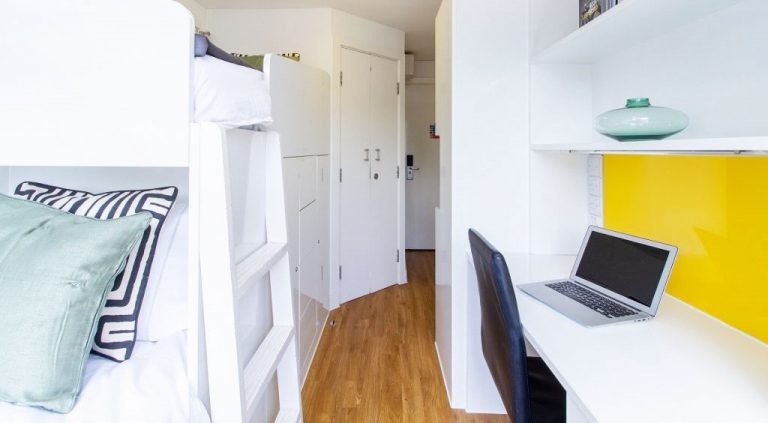 1. The listed prices are per person, per week.

2. The rent may be paid via debit/credit cards or bank transfer.

3. The rent may be paid either in full or in 3 instalments with a UK Guarantor.

4. A refundable security deposit amounting to £99 must be paid in advance to make a booking.

1. No Place No Pay – applicable to 1st-year students. Proof of rejection from the university or UCAS along with a written confirmation to cancel the booking. 2. No Visa No Pay. Submit your request to cancel with a copy of the rejection letter. 3. You can cancel your booking up to 14 days after the date we confirm your booking is complete (the Initial Cancellation Period/Cooling-Off Period).

1. Lightfoot Hall is in walking distance of some of London’s largest universities.
2. Twin en-suite rooms have a TV, fridge/freezer and a microwave.
3. Lightfoot Hall is also close to some of the world’s most famous shops, such as Harrods, stylish cafes, and for sports fans, Chelsea Football Club.