All distances from city center Hamburg

All distances from city center Hamburg 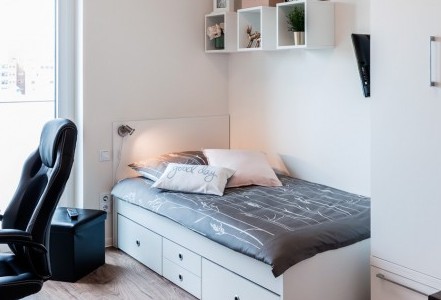 Everything about Student Accommodation Hamburg

Hamburg is the 7th largest city in the European Union and 2nd-largest city in Germany after Berlin. The city of Hamburg has been called Germany's Gateway to the World as it is one of the most important harbours in Europe and the world. The city is proud of its mercantile background, which built the city's wealth in the past centuries. Not only this it is also one of the most prominent media hubs in Germany. Around half of the country's newspapers and magazines have their origins in Hamburg. It’s a worldly, cosmopolitan, and diverse city with so much to offer to its citizens and students who are coming to study here.

There are a limited number of student hall offered by the universities which makes it quite difficult for students to secure one. Therefore most of the students opt to stay in private student accommodation Hamburg near their university campuses which offers good living space and facilities. University Living, a student housing platform helps students find a student home in around 210+ cities around the globe. They offer purpose-built student accommodation (PBSA) which are designed specifically for students keeping in mind their requirements and budget.

Set on the River Elbe between the North and Baltic seas, Hamburg takes great pride in its medieval history as a Free City and an important member of the Hanseatic League. It is a major tourist destination with people coming from all around the world to enjoy its scenic beauty. It has two World Heritage Sites - Speicherstadt and Kontorhausviertel. You will be surprised to know that there are around 2,500 bridges on its rivers and canals, making it the city with the highest number of bridges in Europe. Wrapped around picturesque Lake Alster, Hamburg’s city centre is home to innumerable architectural gems and a bustling shopping district bound into one.

Hamburg is Germany’s wealthiest city and can be called the shopper’s paradise. From shopping malls to local handicraft stores, high-end brands to flea markets, in this city you will find something for every aesthetic and price point. Since Hamburg is located close to the rivers and sea you will always get a supply of fresh fish and seafood. Head to the Altes Land orchards south of the city and you will find the largest fruit-growing region in Central Europe. It is quite a green city with large parks and recreational areas just a short walk from the City Hall. The Planten und Blomen Park is the city’s green heart with manicured flower beds, herb gardens, and vast lawns.

Student life in the city is quite exciting and comfortable as people are quite welcoming and friendly. Students can choose from different types of student rooms such as en-suite and shared rooms, studios, student apartments, and more. Student Accommodation Hamburg placed with the city centre and university both at an easily commutable distance. Your social life is sorted as you can simply go to the Reeperbahn – Europe’s longest party street with countless bars, clubs, and discos. The Germans like to party hard so don’t think the fun will stop before the sun comes up, and maybe not even then. If you’re a music lover you’ll be glad to know that Hamburg is one of the biggest musical cities in the world, second only to New York and London.

Q. How can I rent a student home in Hamburg?

A. Booking of rooms through University Living can be done in 3 easy steps: a) Choose the accommodation you like. b) Pay initial security deposit if asked for. c) Confirm your booking. If in case you are unable to follow these steps, our experienced team will be there to provide all needed free guidance to you.

Q. Does my property offer any onsite amenities?

A. All properties listed with us comes with a wide range of onsite amenities such as laundry room, fitness centre, swimming pool, BBQ, courtyard, study areas, vending machine, bike storage, fully-fitted kitchen, and a lot more.

A. Students doing short-term language courses in Hamburg can stay in fully-furnished student accommodations offered by University Living. You can book these accommodations by visiting the summer stay option on our website.

Q. What are the best student housing options available in Hamburg?

A. Hamburg is a major port city in northern Germany and is home to a number of universities and colleges. There are many good student housing options located in this city including Navale student accommodation, and more.

Q. Can I view my student home in Hamburg before booking?

Q. Will I get cleaning and laundry services at my Hamburg student home?

A. The laundry system in most of the properties have on-site, card-operated washing machines with dryer facility, so doing your laundry is actually a delight for you. Students are expected to keep their rooms clean while common areas are looked after by the onsite team at regular intervals. If you do not want to do the cleaning all by yourself, contact the reception for professional cleaning services at an extra fee.

Q. Can I pay rent of my Hamburg student housing in instalments?

A. Yes. Rent for your student housing in Hamburg can be paid in easy installments and there are numerous modes including bank transfer or your debit/credit card to pay it almost instantly. However, depending on the lease agreement of the accommodation provider you may or may not need a guarantor support for that.
Select To Proceed
Connect on Whatsapp
Instant chat now